I Need a Zipper for My Mouth 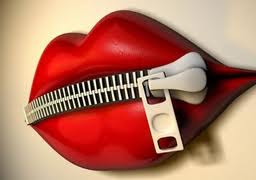 Since we brought domestic discipline into our relationship, I've been doing a lot of reading and thinking. And I've had some ideas. Unfortunately, I have a tendency to share some of what I've been coming across and thinking about, only to have it backfire on me.

You see I might have let it slip that another blogger has an honest to goodness shed where she and her husband go for privacy. But I forgot we have a shed. I guess I thought I was safe because our shed is currently piled to overflowing with a bunch of stuff and there's no way we could utilize it for that purpose.

I was wrong. Steve decided that having the ability to go to the shed when we need privacy is a brilliant idea. So now he's saying that once I get the house back in order, my next major task is cleaning up the shed. He doesn't just want it cleaned out enough we can go in there without climbing over stuff either. No, he wants enough room cleared out that he can put a couch or chair in there. Call me crazy, but that sounds to me like he thinks we'll be spending enough time in there that he wants to be comfy.

And then I might have mentioned that it's frustrating sometimes having to wait on a punishment rather than just get it over, especially since he sometimes gets too tired to handle it and it gets put off until the next evening. And I might have reminded him that when I have to wait until the next day, I tend to start sliding because I figure I'm in trouble anyway.

He jumped all over that one too. Of course, that meant we had to find quieter spanking implements. While I had read about some options, I didn't want to tell him (hearing one described as very ouchie, very stingy and evil probably had something to do with that). But he had an idea of his own and it turns out the very implement I was hoping to avoid by not telling him about it was the one he thought of on his own.

And of course we can't forget about the conversation about internet time. No, I wasn't foolish enough to mention that some wives have a limit on their internet time. I might have been better off with that though.

Steve made the comment one day that he thought I might be more inclined to do my chores if I didn't have the internet to procrastinate with. He said he had considered putting a password on the modem so I couldn't get online until he gave me the password (which would only happen after my chores were done). It goes without saying that he planned to change the password daily.

I laughed at the idea and reminded him it wouldn't do much good seeing as the bill was in my name. All I had to do is call up the cable company, tell them I forgot the password and get it reset. Of course, I failed to see the other option (he didn't), which is him simply taking the modem. He hasn't done it yet and I'm being very careful to not give him a reason to make good on the threat.

While I love the openness that has come with DD, it has its downsides as well. Even though I know telling Steve about the things I'm reading or thinking is not going to bode well for me (or my bottom), I find myself just blurting them out.

I really need a zipper for my mouth.
Posted by Dana at 6:32 AM