What a Weekend: Part 3

Thanks to being up so late the night before, we ended up oversleeping Sunday morning. When I woke up, I still felt that aching need for release even though Steve hadn't touched me yet. After breakfast, he brought me back to the bedroom for a quick tease (it didn't take long to get me back to the edge of orgasm).

Then we went outside to play with our daughter. And even though I had been extremely careful to be good, I managed to get myself in trouble. For something that had happened a week before no less.

You see our daughter likes to mow with her daddy. Once she started getting too big to ride on his lap, he found a small trailer that could be attached to the mower and pulled. We have an old comforter that we put in the trailer to make it more comfortable. Last week, Steve was tired after mowing so when he mentioned he had to go out and get the comfortable put up so it didn't get rained on or dirty, I offered to do it for him. But I forgot.

When he was outside trying to help our daughter catch a butterfly, he found the comforter still in the trailer. He called me over and asked about it, at which point I admitted I had forgotten about it. The problem with this is that I usually have a good memory and nine times out of ten, me forgetting something is directly related to me putting it off instead of doing it right away. This is something that drives him up the wall and we've been working on it. So I wasn't surprised when he whispered in my ears that he was going to spank me over it.

Then it seemed like he forgot about it. About an hour later, I found out he hadn't forgotten. He was just giving me time to worry over it. So he sent me off to the bedroom to get the implements out and get into position to wait for my spanking. It was about twenty minutes later before he came in to give me the spanking he had promised. 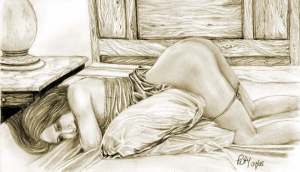 The whole situation turned out to be a learning experience. Having to wait twenty minutes while positioned over a pillow with the implements sitting right beside me as a visible reminder of what was to come gave me time to think about what I had done (or rather not done). He had never done that before and it was surprisingly effective at getting me in the right mindset. He's decided that from now on, I will be sent to the room to prepare for a spanking and think about my actions.

I thought for sure getting in trouble meant an end to my chances of him bringing me to orgasm, but he surprised me. A little later in the day, we went back to the bedroom. We started out on the bed with me going down on him while he teased with his fingers.

Then he decided it was time to work on my oral skills. It has long been a source of frustration for me that I couldn't take all of his cock in my mouth. I had tried many times over the years, but never could quite get all of it. He's above average in size and I've always found myself stopping at that last inch. And because I've always refused to let me touch my head while I gave him oral up until recently, he's never been able to push me to take more.

So I found myself kneeling on a pillow beside the bed with my fingers interlaced behind my back. He started out by letting me set the pace and keeping his hands off. After a few minutes of that, he took control, grabbing my head and urging me to take a little more. He would push me a little farther down then back off for a few strokes, then go right back. I was taking him a little deeper than I had before, but still didn't have all of him.

I could tell that he was scared to push me too far, but I really wanted to do this for him. So the next time I pulled back and let his cock slip from my mouth, I told him to push me. I think I even said something to the effect that I wanted him to use my mouth just like he does my pussy. We resumed and I guess the thought of fucking my mouth like he does my pussy finally got to him because a minute after restarting, he pushed me further than he had ever before and I found my nose being tickled by his pubic hair.

I was having to fight the gag reflex, but the sound of his moan when I finally took every inch of him got me through it. When I pulled back, we were both smiling from ear to ear. I got back to work and he kept pushing until I was able to keep him in longer. Then he told me to get up on the bed.

I climbed back up on the bed on wobbly legs. A minute later he was buried deep inside and thrusting hard and fast. He had me begging for release in just a few strokes. He kept up the torture a few more minutes and then told me I was a good girl for taking all of his cock and he wanted me to cum hard for him. The words were barely out of his mouth when it hit me, the most intense orgasm I've had in my life. By the time he got off, I was on my fourth orgasm.

We collapsed on the bed to catch our breath. But he wasn't done yet. I felt a light touch on my inner thigh and my hips rocked up seeking his touch. After several minutes of him stroking close but never touching where I wanted his hands, he finally touched and I exploded again. He kept alternating between rubbing my clit and stroking his fingers inside, taking me over the edge again and again.

I couldn't tell you how many times I got my release by the time he finally stopped, but I was one very happy, very satisfied woman at the end.

All in all, the weekend was a success. We got to try something new. We learned a little. And I definitely feel more submissive now.
Posted by Dana at 7:14 AM