A Break? No Thanks!

When I first brought the idea of domestic discipline to Steve, I suggested we do it on a trial basis. My thinking was that he might be more willing to try if it was something we were just trying rather than committing to. And maybe in the back of my mind, I was wanting an out in case I found out it wasn't what I really wanted.

He said it was all or nothing. If we truly wanted it to work, we both had to commit fully and as long as we knew it was a temporary thing, we wouldn't be giving it our full commitment. He was right so we both committed.

Knowing that, you could have knocked me over with a feather when we were talking the other night and he suggested that we take a break from DD. Basically, he was offering me an extended hall pass until I'm back to normal. His thinking is that I have a lot going on right now and he can't change most of it so he would change the one thing he could.

I understood what he was saying so I thought about it for a bit. While I was thinking, we kept on talking about what was going on with me, how he unintentionally hurt me with what he said the other day and what he was thinking. Then I made my decision.

I turned him down flat. 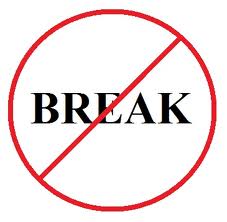 Life is going to throw us some curveballs occasionally. While it would be easy to let things go while we deal with those curveballs, we need to learn how to handle them. We'll never learn how unless we try.

Before DD, I went through cycles of guilt. I would mess up. Steve would fuss at me over it or we'd fight about it. And I'd feel guilty. Then because I was focused on my guilt, I'd end up messing up again, which started the whole cycle over again. DD put an end to that. Now if I mess up, we talk about it, I deal with the consequences, he forgives me and we move on. I'm human and I'm going to mess up at times. I don't want to fall back into those old cycles of guilt.

DD has brought so many changes to our marriage, changes I'm not willing to give up. Better communication, more intimacy, a return to spirituality, more respect and attentiveness. These are all things that came about once we brought DD to our marriage. Even though I know that we should be able to maintain these without DD, I worry that they will get lost.

Last, but not least, even though it doesn't seem that way, DD has been helping me through all this stress. With everything going crazy, our relationship is the one stable thing in my life right now. I know the rules. I know the consequences. I know what to expect. I feel secure.

And while I've had some missteps lately and Steve has thought that him spanking me wasn't having an effect, it has. It helps me feel more centered and connected. It reminds me that even though everything around me is going crazy, he has us in hand. It helps me focus so I can keep going rather than give in to the emotions and let everything go.

And it was for those reasons that I turned him down. Because I know that no matter what life throws at us, we can get through it if we face it together.
Posted by Dana at 8:00 AM