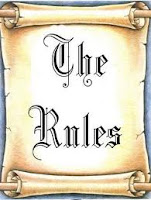 As promised, I'm sharing our rules. We started out with only three rules (the first three). The others have been added as Steve sees the need for them. It's a process and we're still learning what we need to keep things going smoothly.

No disobedience
This covers a lot of ground. It includes disobeying something he told me to do (or doing something he told me not to do). It also covers not doing chores on the chore calendar we agreed to. Nine times out of ten, if I'm in trouble, it has to do with this rule. It's not that I intend to deliberately disobey him, but I have a tendency to procrastinate and I end up not getting things done in time.

No disrespect
This covers the basic disrespectful actions-talking over him, ignoring him when he talks, rolling my eyes, raising my voice to him, etc. We've also chosen to include dishonesty in this rule because we both feel that lying shows a lack of respect.

Dishes must be done daily
This is a major peeve of Steve's. I had a tendency to let dishes build up until I had a huge load to do and then do them all at once. Of all our rules, this is the one he's quickest to notice me slipping on so I try to keep them done up now although occasionally if I'm really tired, I'll forget them and end up in trouble.

Deposits must be made as soon as the bank opens
I don't know why, but I always put off going to the bank when we get money. It was never a problem until a couple months ago when I ended up overdrafting the account because I hadn't made the deposit and mistakenly believed there was enough money in the bank to cover my transaction. As a result, Steve made it a rule.

No "sulking" or refusing to speak when I'm upset
I have a tendency to withdraw and not speak to Steve when I'm angry at him over something. I guess some couples would call it distancing. Whatever you want to call it, it's not good for our relationship and Steve didn't like it so it became a rule.

Medications must be taken as prescribed
I'm generally pretty good about taking my medicines so this rule wasn't originally on the list. It came about after I ended up with a really bad migraine as a result of skipping my pills for a few days. Steve doesn't really check to see if I'm taking my medicine aside from asking me once in a while so he relies on me being honest about this one.

Bedtime is 11:00
This is our newest rule. I tend to be a bit of a night owl so I usually won't go to bed before 1. Since I have to be up in the mornings to get our daughter off to school, this caused some problems. The rule came about when I laid down during the day, slept through the alarm and was late picking up our daughter from school, which cost us money. There is some flexibility. I can stay up later if Steve is up (like on weekends) and I can ask to stay up later in certain cases (company, a movie ending later, etc).

There was a rule about smoking, but it ended up getting dropped because Steve didn't feel right punishing over smoking when he smoked himself. He does still spank over smoking if he feels like I'm smoking too much though.
Posted by Dana at 8:58 AM