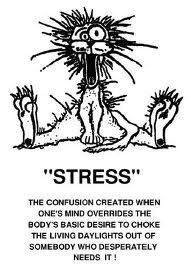 I've been under some tension lately. My parents are in the middle of a divorce. In reality, the divorce should have happened years ago so it doesn't really bother me. I have steadfastly refused to take sides in the divorce. My dad is okay with that; my mom is angry because I won't take her side. She's also angry that I won't listen to her badmouth my dad or talk about the divorce. Things have deteriorated to the point we're barely speaking.

The rift between us was never more evident than this past weekend. Steve had drove me over to see my family. My mom gave me the cold shoulder for a few minutes and then suddenly had to go to the store for something that could have waited. We hung around for a while, but finally decided to go because I wanted to see some other family members before we headed back home.

She got back as we were going out the door and got mad when I said we were leaving so we had time to visit my dad and my sister before we had to head back home. Steve went to buckle the kids in the car, figuring we needed a few minutes alone. Instead of talking to me about what's going on between us, my mom chose to start badmouthing my dad. I told her I didn't want to hear it and walked away.

Even though we had fun visiting other family members, including being surprised by one of my sisters who I didn't expect to see, the tension was there. It got worse when we had to stop back at my mom's house to drop something off before we headed back home. She wouldn't even speak to me. After a couple minutes of tense silence, I got up and left. 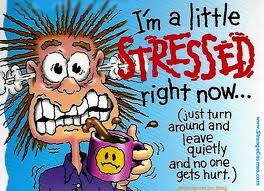 As a result of all the tension over my mom, I ended up snapping at him several times during the day. He knew what was bothering me and was nice enough to let it slide other than a couple stern warnings. The next morning I was still upset and ended up snapping at him twice before I even got out bed. I managed to get out of bed without getting spanked only because I had to get our daughter to school. I figured I was in for it when role affirmation happened that evening.

By the time the evening rolled around, I was about to fall apart. Between the situation with my mom and having a houseful of kids all day because I was babysitting, my nerves were ragged. When Steve came in, I had just knocked over two glasses of milk and was near tears. 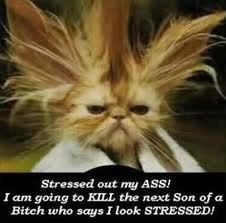 Thankfully he realized how close I was to breaking down because he didn't try to touch me. If he had, I would have fell apart. I asked him to go to the store to get drinks and even though he normally hates going out after he's worked all day, for once he didn't complain. Once he got back, he took over with the kids to give me time to get myself together and to finish dinner.

Role affirmation ended up not happening last night. By the time I finally got the kids down, Steve was tired. To be honest, I think he even forgot it was the day for it. He just rubbed my legs and back to help me relax a little and then we fell asleep.

This morning before I even got out bed, he told me to roll onto my stomach and reached for the new dowel (which was replaced yesterday after the first one broke). It wasn't that many swats, probably not even ten, and they weren't that hard, but it was enough.

Tonight he's doing role affirmation. Or more accurately, it's going to be a combination of role affirmation, punishment (with all the kids, I didn't get my chore done yesterday), stress relief and a reset.

In the past when my tension spilled over to him, we would sometimes argue or avoid each other. Now he has another way of handling tension and even though I know my bottom is going to be on fire, I have to admit it works a lot better than our old methods.
Posted by Dana at 9:02 AM