He's Got My Back and Ive Got His

We always want to protect those that we care about. It's true whether you're talking about a mother and child, a husband and wife or even good friends. That protective instinct is born out of love for each other. But I've noticed that over the past few months since we began this journey, that need to protect each other has grown and evolved to a new level.

As most of you know, I've been at odds with my mom for a few months now. It's difficult, not only on me, but also my family who has to deal with the emotional roller coaster I'm on as a result of the situation. Steve has been a rock for me, listening to me when I needed to vent, supporting me and holding me when I get teary. The one thing he hasn't done is interfere.

At least he didn't try to until this week. I don't know if it's his recent HoH growth spurt making him feel more protective or he was just tired of the situation, but he had had enough. He told me that he was tired of her upsetting me and he was going to call her and tell her to leave me alone. To ensure she didn't bother me anyway, he was going to block her number on my phone.

Unfortunately I had a knee-jerk reaction to him saying that. You see prior to us getting together, I was in a relationship with a guy who was very controlling. I was only allowed to see the people who he approved of, none of which were my family or friends. Even though our house was less than five minutes from my parents, I only saw them a handful of times in the years I was with him. As a result, when I got out of that toxic relationship, I swore that no one, no matter who they were, was going to block me from seeing or talking to my family. 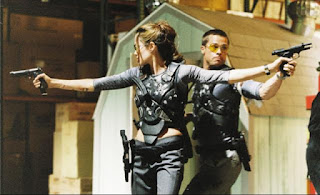 Thankfully, Steve caught on pretty quickly to why I reacted the way I did and he got me to talk to him. Logic set in and I realized that he wasn't trying to be a controlling jerk. He just wanted to help. So I thanked him for wanting to protect me, but told him I preferred to handle it myself. But it's nice to know he's got my back.

Then a similar situation happened in reverse. It's a long story so I won't bore you with all the details, but basically what it boils down to is that when Steve went to his dad for help in a moment of weakness, his dad took advantage of the situation and majorly screwed him over.

Steve's a nice guy, something a lot of people take advantage of, but you don't expect family to do it. I was upset over it, but trying to keep quiet because I knew Steve was bothered by the situation. Finally I hit my limit. I couldn't stand seeing him so hurt over it so I told him I would take care of it. Then I picked up my phone to give my father-in-law a piece of my mind and tell him where he could stick his deal because it wasn't going to happen. 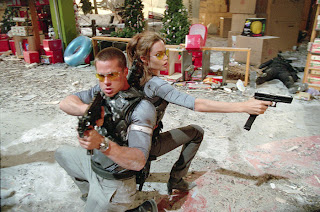 I was so mad I kept mis-dialing, which is probably the only reason Steve was able to snatch the phone out of my hands before I hit send. Just like I had done only a day or two before, he told me he appreciated the fact I cared enough to want to fix something I could see was upsetting him, but this was something he needed to handle himself. But he liked the fact I had his back.

A year ago, I'm not so sure either of us would have been so quick to go to battle on the other one's behalf. We loved each other and looked out for each other of course, but it was different then. 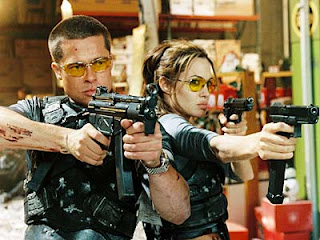 And if you're wondering, the pictures are from the movie Mr. & Mrs. Smith, one of my all time favorites. The movie actually kind of suits me and Steve. Just like them, we used to go along leading separate lives with neither one of us aware of what was truly going on with the other person. But then we rekindled our relationship and now we're united against the world.
Posted by Dana at 9:10 PM