On the Other Side

One of my friends came over yesterday and we spent the afternoon catching up while our husbands tinkered with cars and the kids played. She was a little upset with her husband already so she was talking about what was going on. I generally don't offer advice unless it's requested so I was mainly letting her talk and asking questions here and there to get the full picture so I'd be ready if she did ask what I thought.

I was really struck by the difference between this conversation and one we'd had a few months ago. In the other conversation, she had been bragging about him and everything he does for her and the kids. Her love for him really shined through her words then.

This time, though, I didn't really see that love. She talked about this or that that he had done (or not done in some cases) to irritate her. She talked about not trusting him. She mentioned thinking about leaving him.

I have to admit I understood some of her frustration. After all, I'd be just as ticked at Steve if he came in from work and stayed up all night playing video games rather than spending time with me and our daughter. It wouldn't be a big deal if it was just once in a while, but I'd be upset if it was an every night thing.

I also somewhat understand her trust issues with her husband. In a nutshell, he had promised her he wouldn't do something and then went behind her back to do it anyway. To make things worse, everyone but her knew it. At least she didn't know until I inadvertently let the cat out of the bed by mentioning something about it assuming she did know. While the thing in question is something I consider rather minor, I can understand her thought process. If he can't be honest about something small, you have to wonder if he will be honest about something big.

She was still upset when she left and Steve and I talked a little about it. Since he works with her husband, he's heard some complaints and gripes from the husband's side as well. We both agreed that the best thing my friend and her husband could do would be to quit being passive-aggressive with their frustration and actually sit down and talk about it. Of course it's easy to say that when we're looking at the situation from the outside. When it comes to us, this is something we still struggle with at times.

I felt a little better after talking to Steve. Even though he didn't say it, I knew he would probably talk to her husband. It wouldn't be anything obvious, more like a little advice here and there from someone who's had a few more year's experience with marriage. He's more than a few years older than I am and since some of the couples we're friend with are closer to my age, he sometimes takes on a role of big brother or trusted uncle with the guys. But something still bothered me about the conversation.

It wasn't until later when we laying in bed watching a movie that it hit me. A year ago, that could have been me. Not the specific problems my friend is dealing with, but the general dissatisfaction with your spouse that leads to you bashing them to friends without remembering their good qualities. Forgetting to show that you still love them despite their faults. A year ago, I probably wouldn't have saw anything wrong with it. But these past few months have brought a lot of changes to us and I can't imagine doing that now.

I still get upset with Steve at times and will turn to friends offline or here to vent my frustration. But I try to balance the bad with the good, acknowledging the good he does along with my complaints about whatever bonehead thing he did to upset me. Or at least I hope I come across as doing that. If I don't, please tell me because I don't want to be the type of woman that is always knocking her husband.

I saw this picture on Facebook the other day and it really struck a chord with me so I'm sharing it here. 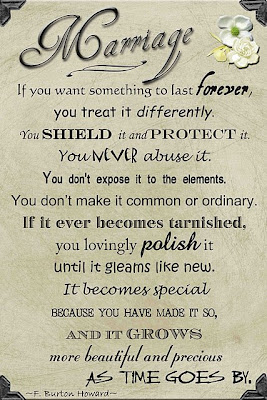