We were laying in bed talking. And by talking, I mean Steve was talking and I was listening. Well he called it talking. I called it lecturing. Between hormones and stressing about a financial situation, I was a bit off this week and it was showing in a number of ways so he felt like it was time to nip things in the bud.

Everything he was saying made perfect sense. Even I had to agree with him. But I didn't want to because that meant I was agreeing that I deserved the spanking I was going to get. It didn't matter that he was right and I did deserve it. I just didn't want to admit it. 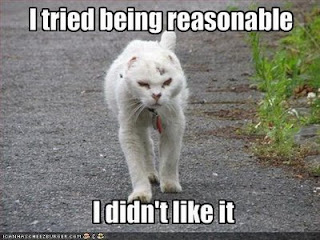 That's when I turned to him and said it.

"I hate it when you're all reasonable. I can't argue with it."

He just laughed and said it was good because I shouldn't be arguing with him anyway.

When we first started out, Steve was a bit hesitant about laying down the law and standing his ground. The lecture was an area of particular weakness for him. He'd tell me what I was in trouble for and I'd immediately start debating about it. I would use my full arsenal of excuses, loopholes and the occasional offer of exotic sexual favors, anything to get out of being spanked. Even though I had asked for all this, I was having a hard time truly letting go of control. As a result, he ended up backing down a lot more than he probably should have.

But he's had a lot of growth these past few months. One area of that growth has been the lecture. Now instead of just listing my infractions, he breaks it down and explains step by step why it's a problem and needs to be addressed. He's just so danged reasonable about it that, even though I don't want to, I find myself agreeing with him.

He's also less likely to back down now. While I have also grown over these past few months and now take more responsibility for my actions instead of making excuses, I still occasionally find myself trying to talk my way out of trouble. He always listens to what I have to say, but if a legitimate reason isn't forthcoming, he goes forward with what he has planned.

And yes I got spanked, although it ended up being delayed by a couple hours after the lecture. Right as I was being sent to collect implements, the doorbell rang so Steve got up to deal with that. It was his boss. He finally got rid of him only to have a neighbor show up. After the neighbor left, Steve realized how late it was getting and said he had to fix something on one of the cars before the daylight was gone.

Since it wasn't supposed to take that long to do, he sent me to the bedroom to wait. It ended up taking a little longer than he anticipated, but that wasn't necessarily a bad thing. As I laid there across the bed with the implements laid out beside me, I had some time to think and by the time he came in, the lecture he had given earlier had really sunk in.

We talked for a minute and then he got down to business. It wasn't fun, but when are they ever. But now it's behind us and hopefully I can get my head back where it needs to be so we have smooth sailing ahead.
Posted by Dana at 5:39 AM