The Need for Speed

Yesterday I was on my way to pick up my daughter from school. I was cruising along listening to the radio and thinking. I was speeding, but I wasn't too worried about getting pulled over because the cops are normally sitting at the other end of the road and I know to slow down as I get close to that point.

This big SUV had been riding my bumper for a couple minutes, which was annoying me because the roads were still a bit slick from all the rain we've had lately and I didn't want to get rear-ended if I had to stop quickly. There wasn't really room to move over into the other lane so I stayed in my lane cruising along at the same speed.

Then I looked up in my mirror again and saw a sight that nearly stopped my heart. 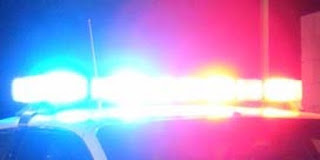 My first thought was "Oh crap I'm going to get a ticket for speeding." That thought was immediately followed by wondering how we were going to pay the ticket when we're dead broke right now. Then my thoughts moved to the effect of a ticket on our car insurance premium.

But it was the last thought that really filled me with dread. I realized that I was going to have to tell Steve and he was NOT going to be happy about it. And by not happy, I mean I probably wasn't going to feel comfortable sitting for a couple days.

You see I used to be a bit of a speed demon. Having to pay a very expensive ticket and nearly losing my license over speeding in my teens slowed me down for a while, but by the time Steve and I got married, my lead food had returned and it was only through dumb luck that I hadn't got caught speeding again. So he told me if I got a ticket, he was taking my keys until he felt I could be responsible enough to travel at a safe speed, or at least one that wouldn't get me a ticket. Looking back, I see he had HoH tendencies even then.

Shortly after we started DD, I nearly got pulled over for speeding. I wasn't paying attention when the speed limit dropped and I went by a cop running about 13 over the speed limit. Around here, you can go five or six over the limit without a problem. Anything more and you get pulled over. Thankfully, right after the cop pulled onto the road to come after me, another car blew by both of us going even faster than I was and the cop decided to go after that car rather than mine. When I mentioned it to Steve, he said since taking my keys wasn't really an option anymore with us having a kid that needs to be taken to and from school, I could expect one heck of a spanking if I got a ticket for speeding.

Anyway, after seeing that heart-dropping sight in my mirror, I carefully merged into the right lane in preparation for pulling over at the next spot I could do so safely. Meanwhile I was praying desperately that the officer would take into account that I haven't had a ticket for anything in years and let me off with just a warning.. I would still have to tell Steve and would probably still be in trouble, but it wouldn't be as bad as if I'd got an actual ticket.

I was a little confused when the cop didn't immediately follow me to the right lane. Then I breathed a sigh of relief when he flipped his lights off and kept going up the road. I don't know if he was warning me about my speed, just wanted me out of his way or got a more important call at that very moment, but he didn't pull me over.

I have to admit I debated about whether or not to tell Steve. After all, I didn't really get pulled over and I didn't get a warning or a ticket. I was alone in the car when it happened and barring someone we both know seeing it happen and telling him about it, he would never find out.

But even though he would probably never find out, it would bother me. To not tell him flies in the face of the honesty and trust our relationship is based on. I just couldn't do that to him, to us.

I wasn't quite sure how he'd react. He'd had a bit of a rough day and was aggravated when he got home so I held off on telling him right away. When we went to bed, he talked a little more about his day, but he was calmer so I kind of led into it by saying "Well it could have been worse. You could have got blue-lighted like I did."

He was quiet for a minute before asking why so I told him I had been speeding. Then he asked how fast I was going. Finally he asked if I got a ticket. Since he was already turning towards the drawer where we keep the implements, I was quick to assure him that I hadn't. He settled back down after hearing that and I told him the whole story.

I didn't get in trouble. Since the cop never actually pulled me over, there's no way to be sure whether he flipped on his lights because I was speeding or for some other reason. He did, however, remind me in explicit detail of what I could expect if I do get a ticket.

I think it's time to slow down. I don't think my buns of steel are quite up to handling the trouble my lead foot might bring.