I've been sharing a lot here, both about myself and our journey. I think it's time to introduce an old friend. This is Snappy.

We've been friends for a long time, probably because we're so much alike.

We both have a hard shell to protect our inner softness. It makes people think we're a lot tougher than we actually are. 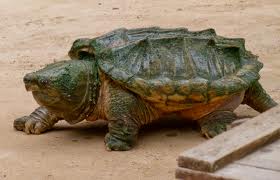 We both tend to withdraw if we don't like how things are looking outside. 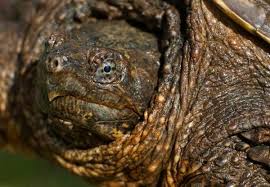 And last but not least, if you irritate us, you're probably going to get bit. Snappy tends to go for fingers or toes. I'm more likely to bite your head off. 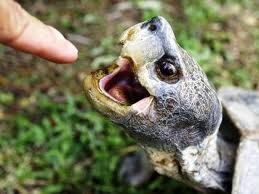 As I'm sure you can guess, Steve doesn't care for my good friend Snappy. He says Snappy is a bad influence on me. Something about it being better to talk things out instead of withdrawing and snapping not being a respectful way to express irritation. He tends to send her on her way pretty quickly when she makes an appearance.

Snappy snuck back this week. At first she was a discreet visitor. She kept her snapping to a minimum, leaving the room or grumbling under her breath. But she wasn't as discreet as she should have been. It turns out Steve hears a lot better these days and he caught a few of those mumbled snaps.

When we went to bed last night, he started trying to get me out of my shell. I wasn't having it. Finally I weakened and moved a little closer, eventually laying across the bed with my head in his lap. We laid there for a while and then his hand came down on my bottom hard. It wasn't awful, but it definitely had an edge to it that indicated it wasn't exactly a playful swat.

A few minutes later, it happened again. This went on for about fifteen minutes with a hard swat and then a break for anywhere from 30 seconds to 2 minutes. They were starting to really sting, but the breaks made them easier to take.

Then came a flurry of swats that weren't so easy to take and I started squirming. Steve is over the squirming so he quickly shifted position and then I couldn't squirm. He made it clear that it wasn't a punishment, just a reset, but Snappy needed to go.

I decided to give in. After all, it was just a reset with his hand. If Snappy stuck around, it could easily turn into a punishment with the paddle (or worse). So I sent Snappy on her way, happy to maintain my punishment-free streak.
Posted by Dana at 4:14 PM