Not Quite What I Imagined

As our anniversary approached, I began making plans in my head. Since it fell during the week this year, I figured we probably wouldn't be able to do something on the actual day so I made arrangements for our daughter to go to her grandparents' house the weekend before our anniversary. I figured we'd exchange cards, go out for a nice dinner, do a little shopping at the adult store and then come home for a couple hours of playtime before we had to pick our daughter up.

That's not quite what happened. A raging toothache started a couple nights before our planned date. Steve was very sweet about it, taking over for me whenever possible so I could rest since the only relief I could get was when I took enough medicine to knock myself out. Some major misbehavior by our daughter on the day she was supposed to go to her grandparents' led to her getting grounded. Since I was in so much pain, I didn't even really mind that we were missing out on our evening out. 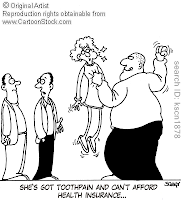 The toothache steadily worsened as the weekend wore on. By the time our anniversary actually arrived, the whole left side of my face was swollen like a chipmunk and I had taken so much medicine that I made myself sick.

I started trying to find a dentist even though I knew we couldn't really afford it. I called the place I usually go to, only to find out that they were no longer taking adult patients. I called the health department dental clinic because I knew they worked on a sliding scale. Despite multiple calls, I never could get ahold of anyone there.

I started working my way through the dentists listed in the phone book, but none had an opening for at least a week. None would call in pain medication or antibiotics without seeing me either. I called my regular doctor to see if she would prescribe them, but couldn't get through to her so I left a message with her nurse

When Steve returned home from taking our daughter to school, I was in tears. It shocked him because I have a very high tolerance for pain. I didn't even cry while I was in labor with our daughter. I asked him to take over calling because the swelling was making it difficult for people to understand me when I spoke. I forget how he responded, but it irritated me and I snapped at him before leaving the room to lay down with an icepack.

A few minutes later, he came in the bedroom and told me to get up. I thought I was in trouble over snapping at him and I was ready to do battle over it. Instead he told me to hurry up because he'd found a dentist willing to see me right away. While the dentist hadn't said they would pull the tooth, they had promised to do something to make me more comfortable.

Two hours later, I was on my way home with one less tooth, a numb face, a prescription for antibiotics and pain medication and a referral to a traveling free dental clinic for another tooth that wasn't causing me pain, but would need to be repaired in the near future. Steve dropped me off at the house, got me settled with an icepack and left to fill my prescriptions and get me something to eat.

About an hour later, he returned, doled out my medicine and then we sat down to our anniversary lunch. I had hot and sour soup from the local Chinese restaurant (the only thing I want when I don't feel well) and he had fast food. 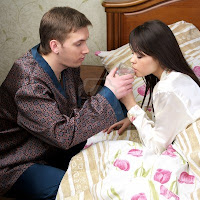 While it wasn't quite the anniversary I pictured in my mind, I can't say it was necessarily a bad one. Steve has been great through the entire experience. He kept calling until he found a dentist willing to take me right away. He's babied me, fixing my meals, making sure I take my medications on time, taking over my normal duties as far as the household chores and taking care of our daughter, and even getting up in the middle of the night for an icepack when the pain returned and it was too early for another pain pill. Of all our anniversaries, this probably ranks as the one I have felt most loved and cherished.
Posted by Dana at 11:28 AM