You see this car? It looks all innocent, doesn't it? 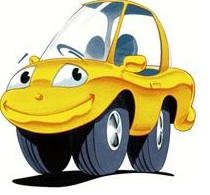 Well don't let it fool you. It's a lie. It may put on an innocent look, but underneath, it's like this. 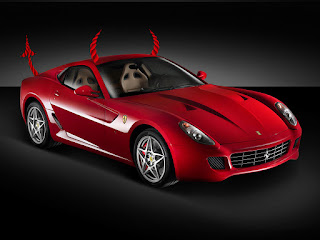 That darned car got me spanked. And not for the first time either.

You see a few months ago the ignition switch in it was going out. When Steve didn't fix it in what I thought was a reasonable amount of time, I got a little snappy about it. And I got spanked.

And last night, it got me spanked again. You see my tag expired last month. Normally that's not a big deal. I get my inspection done, pay my property tax on it and then head to the tag office for my renewal sticker.

But we were broke. Really broke. Broke enough that we were rolling change to get Steve to work. So I parked my car and started driving our other truck. It wasn't ideal because I don't like driving that truck. It's not sporty like my car. It's big and hard to see out of. And it's just downright difficult to drive. But I had to have something to drive so I could get our daughter back and forth to school.

Then Steve got paid. When he handed me the money, he said he wanted my tag renewed first thing Monday morning. I reminded him that it was a holiday so he said first thing Tuesday morning then.

After being up for two days with very little sleep, I was exhausted Tuesday morning when the alarm went off. So as soon as everyone left, I crawled back in bed for a few more hours. Then once I got up, I was still tired and not at all motivated so I put it off, figuring I'd get to it later in the day.

When Steve came home from work, he didn't ask and I didn't tell. We played with our daughter, visited with each other and had supper. Then he went to put our daughter to bed (she's definitely a Daddy's girl).

As soon as he walked back into the room, he asked if I had got it done. I didn't have to answer. That deer in the headlights look did it for me. 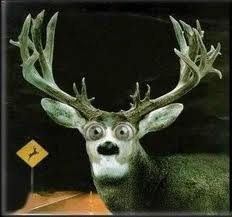 Then he asked why. Was I working? Did some emergency come up? Was I busy doing a lot of chores? I tried to blame it on being tired, but he knew it was that I had procrastinated.

You're getting spanked tonight.

Ugh! That feeling settled in the pit of my stomach. We watched TV for a while, but I couldn't concentrate. Finally I went to check my email.

When I came back in the living room, he was nowhere in sight. Neither were the dogs. I quietly opened the bedroom door and saw he was asleep with them. So I tiptoed in, figuring I'd slip into bed, having dodged that bullet. I'm no dummy. I knew Steve wasn't happy with me and I certainly wasn't going to wake him up.

But I didn't have to. Either he wasn't as asleep as I thought he was or he heard me come in. As soon as I started to climb into bed, he told me to put the dogs out.

I knew it wasn't going to be pleasant when he started with a warmup. And it wasn't. After what seemed to be a very short warm up, he went straight to hard, rapid-fire swats. By the time he was done, I was in tears. I slept with the covers off last night.

This morning before Steve left for work, he reminded me to get the car taken care of. He also added that last night would seem like a warmup compared to what's going to happen tonight if it isn't taken care of. He didn't even relent when he found out that I was going to be babysitting today. So now I have to do all that stuff with kids in tow.