2.) What do you most often call your HOH/Spanker? (Sir, Master, etc.)
Usually Steve or hon. Occasionally a Sir will slip out, but it's more something that happens than anything intentional.

3.) What does your HOH/Spanker most often call you? (Young Lady, Girl, etc)
Hon or mama.

4.) We're building a big spanko bonfire, which one implement are you bringing to toss in?
This one's a no brainer. That infernal cane would be the first thing to go.

5.) We all know how many punishments there are to choose from; spanking, lecturing, corner time, etc.. but what about rewards? Do you have a favorite 'reward' that is used? If not, what's something you'd like used as a reward?
We don't really do rewards. The best reward he gives me is appreciation for what I've done. Of course, hearing him brag to other people about what a great wife I am is nice too.

6.) What's that one phrase, that when it's used, you know you're in trouble?
Since we usually can't handle things right away, it's "We'll deal with this later." If we have the privacy to deal with it right then, it's "Bend over." Sometimes he'll just give me a look and I know right away that I went too far over the line.

7.) What's something you'd like to cross off your spanking bucket list? Being shy is not an option here people. ;)
Getting a hall pass? Although Steve says that's never going to happen.
8.) Someone comes to you, and says they just started practicing domestic discipline. What's the biggest piece of advice you can give them?
Don't get so caught up in doing things the way they are on a specific blog or in your head. If you're truly going to let your partner lead, that means letting them lead in their own way, even if it's different than you thought it was going to be. That was one of the hardest things for me to learn.

9.) Where is the craziest place you've been spanked?
This one was a tough one because we generally only spank when we have privacy which means at home in our bedroom. If I had to choose one, I guess it would be the laundry room. Number one, because I was leaning over the washer (a real feat for someone short like me). Number two, because we could have got caught easily.
10.) We talked about a spanking bucket list, now let's get a little more into it.. what about a BDSM style bucket list? What's something you'd like to cross off of that?
Nipple clamps. Steve likes tweaking my nipples during sex and it's a huge turn on for both of us.

11.) Is there a punishment you thought you'd never try, but ended up trying and finding effective?
We mainly do just spanking. He did once threaten to take away my internet, something I never expected him to do. While it was unexpected, it was effective because I didn't want to give up my internet.

12.) What is something you wish you knew before you started DD/TTWD?
That sometimes you spend more time off roading than actually on the path. DD is sometimes messy and you have to take the rough patches with the good ones. In all honesty, I think the rough patches are the ones where we grow the most.

13.) If you could take a break from one rule, for one week, which rule would it be?
This one was a tough one. I would say the bedtime rule, but since it's rarely enforced, it's not a huge deal. I guess the dishes rule. They're one of my most hated chores and it's a rule that they have to be done every night before bed.

14.) This might sound like a no brainer at first, but really think about it. If you could only have one sort of spanking in your dynamic, would you rather it be discipline or fun?
Discipline. While the discipline ones aren't any fun, they return much more than the fun ones. They help me let go of the guilt and Steve let go of his frustration so we can move on instead of dwelling on the past.

15.) If your HOH/Spanker messed up, and offered to let you spank them, would you? Why/Why not?
No. He's offered to let me spank him before. Not because he messed up, but so he could see what it was like on my end of the implement. It just didn't feel right.

16.) What is your favorite form of aftercare?
Snuggling. I curl up in his arms and he strokes my hair. Sometimes sex follows, but not always.

17.) How was DD/spanking brought up to you, or how did you bring it up to your partner?
I came across it online while looking for something else. At first I wasn't at all interested, but the more I read, the more it made sense. It took me over a year before I worked up the nerve to tell Steve. I spent several days writing all my thoughts down in an email and then sent it to him. Then I high-tailed it to the bathroom and took the longest shower of my life while he read it.

18.) If your spanker could use only one implement from here on out, what would they use?
Probably the paddle. He really likes it.

19.) Do you have a favorite pair of panties to wear when you know you're going to be spanked? If so, what are they?
I've been thinking about ordering some made out of steel, but I'm not sure how well that's going to go over with him. I don't really have any specific ones I wear for spankings.

20.) Unfortunately/fortunately (depending on how you look at it) mind reading hasn't yet been perfected. What's something you want your HOH/Dom/Spanker to know? (For example, don't be afraid to spank harder, or something along those lines.) Don't be afraid, spill!
I'd be in a lot more trouble if he could read my mind. I already let more slip out of my mouth than I should. As for what I would want him to know, I'd tell him that I know that this isn't always easy on either of us, but I love him for caring enough to do this. I'd also let him know that I'm not breakable and it's okay to spank a little harder and be more strict.

*Bonus Question (just because it's fun)- Is there a picture (spanking, dd, Ds, etc related) that you just really love? If so, let's see it!*
I came across this one the other day. It's obvious by his stance, the belt in his hands and him rolling up his sleeves that he means business. The words make it even more real. 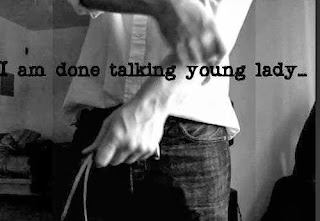