Yesterday we ended up with an unexpected day together, a rare occurrence. Normally we're lucky if we get a couple hours to ourselves so having all day up until our daughter got home from school was a welcome surprise. Steve was supposed to have gone to work with his boss, but his boss never called or came to get him. We found out later that it was because the woman that works in the office had failed to order the materials they needed (something that happens on a frequent basis) so he ended up not going at all.

I don't know exactly why, but I was feeling a bit sassy. Maybe it's because I was giddy over getting so much alone time with him. Maybe it was the fact that I hadn't been getting a lot of sleep lately (something that always seems to interfere with my brain to mouth filter).

At first it was mostly in fun. Steve was joking about it, saying he was going to start calling me Sassy. We spent the day tackling projects that we had been putting off. He helped me rearrange the laundry room. He fixed the dryer that had went out again (for some reason, the wire that goes to the heating element keeps breaking). He helped me dismantle our bed so I could deep clean it and even pitched in on vacuuming the frame, box springs and mattress.

Since we had swapped where the washer and dryer were when we rearranged the laundry room, he said he needed to go to Lowes to get a longer vent hose. I volunteered to go with him. I love going to Lowes. I like looking at all the different stuff and mentally designing my dream house. Despite the fact that he's more of a in and out kinda shopper, he usually gives me time to wander because he knows I do this. 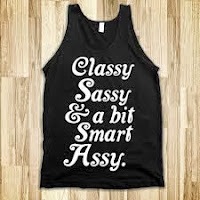 On the way to Lowes, I finally crossed the line between fun and trouble. I knew it right away because Steve threatened to pull the car over on the side of the road and spank me. But I was on a roll and didn't really think he'd do it (after all we were on the interstate with tons of other cars) so I said yeah right.

As soon as I saw him hit the blinker and felt the car slowing down, I started backtracking. I quickly threw out every reason I could think of why he shouldn't do what he threatened. Once he turned off the blinker and picked up speed again, I breathed a sigh of relief.

We ended up having a good time wandering around Lowes. We spent some time in the appliance section. Just last week, he surprised me with a front loading washer (something I've wanted for a while because short people and top loading washers don't work well together) that he'd got at an amazing price. We looked at the dryers and he said he was planning on getting me a new one when he gets paid again. I also showed him the new fridge I want when ours croaks (which will probably be soon as he's already had to fix it three times).

I did end up getting spanked a little later, but it wasn't too bad. Steve decided to do role affirmation rather than a punishment. He had put it off earlier in the week since I was doing good, but figured I was getting a little too feisty for my own good so it was needed. I did get two swats with the cane at the end, though, for the remark that prompted his threat to pull the car over.
Posted by Dana at 9:10 AM