Stuck on a Speed Bump 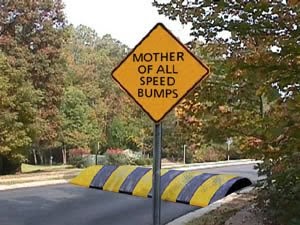 Back when I was in college, I was terribly homesick. I had just got engaged (to a guy previous to Steve) and I hated being away from him so every Friday after class, I would set out on the 4 hour trip home. Then I would attempt to cram as much time with him and my friends in before making the 4 hour trip back on Sunday night.

It was a lot of driving and a lot of wear and tear on my car. So it came as no surprise when something broke on it. One Sunday evening when I was returning to college, I started over one of the many speed bumps on campus and my CV joint fell out. I didn't realize what had happened at first. I just knew that no matter how much I pushed the gas, my car wasn't moving. Campus security showed up a few minutes later, diagnosed the problem and pushed me and my car into a nearby parking lot.

I feel like that's where we're at these days. We had been going along just great coming away from our amazing child-free weekend and we've stalled out. Just like back in college when I didn't know what had caused me to stop on that speed bump, I'm not completely sure why we're stuck now.

Coming off of that weekend, I was floating on a submissive high. Suddenly keeping my tongue in check was easy, things were getting done and staying out of trouble seemed effort-less. I barely even noticed that Steve skipped role affirmation that week.

He skipped it the second week as well. But things were starting to unravel. That submissive high was beginning to dissipate. My tongue started flexing a little. Snappy poked her head out and looked around. By the end of the week, I suggested to Steve that it might not have been a good idea to skip role affirmation two weeks in a row.

Week three it all went downhill. He skipped role affirmation yet again without saying why. After her vacation, Snappy was raring to go so I let her. I'm a bit shocked at the things she's said lately. She even said something majorly disrespectful in front of someone else the other morning.

Spankings have been threatened more than once, but not followed through. Meanwhile Snappy's going wild. Buttons are getting pushed. Submission has flown the coop. And I'm feeling majorly disconnected.

Steve has backed off and I'm not sure why. He isn't talking about it. I've been trying to give him some space to work it out, but it doesn't seem to be helping. And I'm left feeling just like I did years ago when my poor little car got stuck on that speed bump. I know something isn't right, but I'm not sure what it is. But I do know that until we diagnose the problem and do something about it, we're not going to be moving forward.
Posted by Dana at 11:18 AM