I have big news. Two pieces of big news to be exact.

First up, after lots of research, discussion and prayer, I've decided to go back to school to get my degree. This won't be the first time I've attempted college. I went immediately following high school, but ended up dropping out due to family and financial issues. This time I'm determined to see it through. 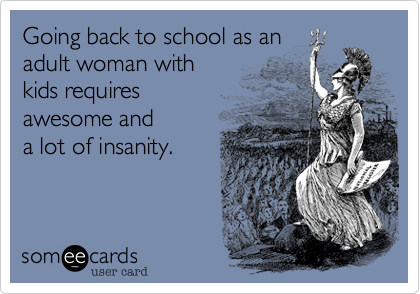 Apparently my determination to get a degree sparked something in Steve because he's decided to join me in my return to school. Unlike me, he went to work straight out of high school so this is his first attempt at college. He's a little nervous about it because he's been out of school a lot longer than I have, but I've promised to help him. Who knows? Studying together might even be fun.


So we've spent the last couple months filling out paperwork, applying for financial aid, studying for and taking placement exams, meeting with our advisor (we got lucky and got the same one) to plan our curriculum and rearranging our schedules to make it all work. We start back this summer. Originally we both planned to stop once we got our Associate's degree, but after some thought and prayer, I've decided to keep going and get my Master's so I can be a counselor.

Now for the other big news, something that we've been hoping and praying for. After months of searching help wanted ads, putting in applications and going on job interviews, Steve got a call from one of the companies yesterday.

They want him to start this coming Monday!

He was a little disappointed to find that it isn't the shift he originally applied for. When he first interviewed, the position was a 12 hour rotating one. He'd work three days one week and four the next. We wouldn't see each other much on the days he worked, but he'd be off three to four days a week, which would be awesome.

Instead, they hired him on an 8 hour shift working 5 days a week. It isn't what we were hoping for, but I'm trying to get him to focus on the positives. An 8 hour shift is going to be easier on him than a 12 hour one. It means we'll still be able to spend time with him in the evenings instead of him coming home and going straight to bed. And he still gets two days off a week, which is more than he has with his current job, where he was lucky if he got one day off a week.

Thank you all for the prayers and good thoughts sent our way.