I See the Light

As you guys know, I've spent a good chunk of the last couple months frustrated over lack of time together. Steve has been fairly patient with me through, regularly reassuring me that his schedule would eventually calm down. But it was really hard for me to see the light at the end of the tunnel because it seemed like every time that was on the horizon, something happened to keep it just out of reach. 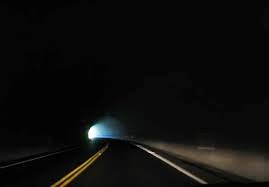 Today when he came in from work, he asked me to join him in the bedroom, saying he needed to talk to me about a few things. It threw me for a loop because I had no idea what was going on. But I headed into the bedroom to see what was up.

Once we were sat down, he handed me a piece of paper. I looked at it. It took me a minute to realize it was some kind of schedule. He gave me another minute and then told me to look for the yellow squares on the C row. I looked and noticed that each week only had three or four yellow squares. But I still didn't know what all that meant.

So he explained it. C schedule means he works from 7 am to 7 pm. The yellow squares are the days he's scheduled to work. He'll work two to three days and then have two to three days off. Basically it works out so he works three days one week and four days the next, alternating through the year. He ends up getting a three day weekend on alternate weeks.

Since they don't want him starting the new schedule until Sunday (apparently their payroll week starts on Sunday), they gave him the next two days off. That means while our daughter is at school tomorrow, I'll have him all to myself. Then we'll have a family day on Saturday.

As luck would have it, the way they have him starting the schedule means he'll be off the next two days after that. Our daughter is out for the holiday on Monday so we'll have another family day. Then she goes back to school on Tuesday and I get him all to myself again.

If you need me before Wednesday, just look for the crazy person doing the happy dance.