I woke up early this morning. I'm not sure why, but I was wide awake at 4 am. After tossing and turning for half an hour in an attempt to go back to sleep, I gave up and got up for the day.

This was a bit of a switch for us. Steve is normally the morning person. Even if he doesn't have to be up early for work, he naturally wakes up around 7. Our daughter usually wakes up a little later. If he's not working, I generally sleep in while they go out to breakfast. My philosophy on mornings tends to be something like this. 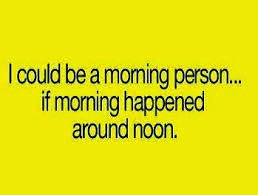 I wasn't quite sure what to do with myself since I'm not used to being up that early. Generally, if I'm up at 4, it's because I haven't gone to bed yet. So I wandered around the house, caught up on email and played an online game for a bit.

About seven, I slipped back into bed with Steve. I briefly debated the wisdom of waking him up on a morning that he could finally sleep in, but after a quick under-blanket grope, I figured he wouldn't mind. He didn't.

Then it was off to the kitchen to fix breakfast. Bacon, eggs and cinnamon rolls. Our daughter woke up as I was bringing him his plate so I threw her a plate together before sitting down to a leisurely breakfast.

Not a bad way to start a Saturday.
Posted by Dana at 6:24 AM