I Think That Ship has Sailed

I think that ship has sailed. 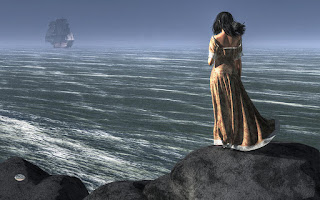 I said those words to Steve a while back. In my heart, I hoped he would disagree. I hoped that he'd say that DD wasn't without its challenges now, but we'd figure it out. I hoped he'd say that it was important enough that he was willing to do whatever it takes to make it work.

But he didn't. He just agreed.

When we talked about putting DD on the back burner a while back, I was on board for it. I figured between moving and figuring out how to work around three more people in the house, it was going to take us a little time to shape it to fit our lives. I didn't imagine that putting it on the back burner was a prelude to it going away altogether.

I've really struggled with my emotions since that conversation. If it had stopped there, I probably could have moved on. But since the random swats, the occasional threats of a spanking and him getting after me over stuff continued, it made it hard. I mean was it still there or not?

Finally I hit my limit. I'm an all or nothing kinda girl and being in limbo drives me up the wall, not to mention messes with my emotions. I told Steve he had to make a decision because I couldn't take the uncertainty. If it was continuing, then we needed to come up with a plan to make it work despite the challenges. It we were stopping, then it was done. No threats. No bossing. No random swats. The only things I wanted to retain from DD was the closeness and improved communication.

He said then it's off the table until my sister and her kids move out. While he's drove me up the wall at times, that was the closest in nearly eleven years together that I came to strangling him. He completely missed the point. It's one thing to put it on the back burner temporarily while one of us is sick or even when we were in the middle of moving and just didn't have the time or energy. It's a whole another thing to put it on the back burner indefinitely. 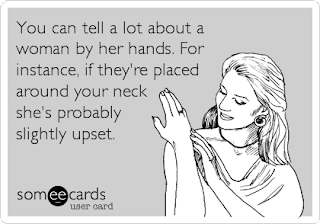 While my sister finally has a job, she doesn't make near enough money to support herself and the kids. It's unlikely she'll be able to until she's finished with her degree. She'll be graduating with her associate's next summer (me too yay!) so it's going to be months before they're gone. I don't see us going that long and then just picking it back up like we didn't take all that time off.

I think a big part of my frustration is that I can see us continuing DD despite having a houseful of people if only he would change how we do it. I wrote over a year ago about how an over-reliance on spanking had painted us into a corner and left us with no options when spanking wasn't an option. After we had that talk, he tried some other options (with success I might add) such as corner-time, grounding, being sent to the bedroom, and extra chores. And of course there's always the option of using silent implements or waiting to carry out a spanking since we do occasionally get the house to ourselves.

Things kinda went downhill from there. The first week after our discussion, it seemed like he was doing what I asked and leaving the random swats, etc. in the past. By the second week, he was back to doing it. The more he did it, the madder I got. When he tried to pull the HoH card to get his way in something, it lit my fuse. It's one thing for him to pull the HoH card when he's fully embracing the role and caring about my needs. It's a whole different thing to pull it just to get his way without caring about the rest.

When you add in some of the frustration and stress that my sister being here has brought (that's a whole another post in itself), it wasn't long before we started fighting. Now Steve and I have never really been fighters. We get a little snippy with each other once in a while, but full blown screaming matches are extremely rare. To have it happen more than once within a couple days was a sign that something was seriously wrong.

So we sat down and talked again. I'd like to say that fixed everything, but it didn't really. We agreed that my sister is a big part of the problem (both the lack of privacy and the frustration we're both feeling over some other stuff due to her) and he is trying harder not to push my buttons by bringing up DD-related stuff that we both know can't happen right now.

While things are better between us, it's still not smooth sailing. For now, I'm trying to remember that no journey is without its difficulties and working together to get through them will only make us stronger in the end. 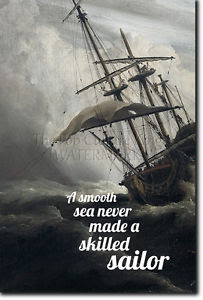