Pregnancy is Not a Get Out of Jail Free Card

Ever since we found out we had a baby on the way, Steve has been treating me like I'm made of glass. I'm not allowed to pick up anything heavier than a milk jug, and he even frowns on that. He won't let me stand on chairs to reach stuff anymore. He's after me to eat right, get plenty of rest and take my vitamins. Eating right is a challenge some days since morning sickness has me queasy, but I'm so exhausted I'm sleeping 14-16 hours a day.

He's also been extremely lenient, which has been a plus since hormones and generally feeling crappy means my attitude has been less than stellar. He even let me off the hook with only a warning when I hung up on him the other week, normally a sure-fire way to get a very unpleasant spanking.

As a result, I started feeling a bit invincible. When a mood swing hit, I rolled with it instead of trying to control it. Then I got feisty and started pushing a few buttons. 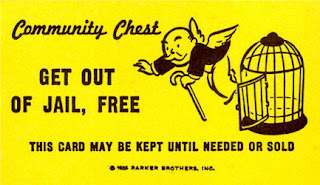 If I wasn't feeling so secure in the bubble of protection my pregnancy offers, I might have caught on to the fact that Steve was less than amused. Instead, I floated along thinking my bottom was safe, right up until last night when Steve informed me that pregnancy is not a get out of jail free card. He followed that up with an announcement that I was long overdue with a spanking, a situation he planned to rectify ASAP.

I would have preferred to just get it over right then, but that's not how Steve rolls. He told me that it was up to him, not me, to decide when it was going to happen and right now he just wanted to watch TV for a bit.

As it turns out, it ended up getting put off, at least temporarily. My morning sickness, which has only been queasiness so far, decided to kick it up a notch. One minute, I was laying beside Steve watching TV and anxiously awaiting the fate of my bottom. The next minute I was running for the bathroom.

Needless to say, he decided to postpone. Of course, that now means I have a spanking hanging over my head. Grrr!
Posted by Dana at 9:59 AM