After having a fairly mellow pregnancy up until now, the hormones have struck with a vengeance. I woke up the other morning feeling out of sorts. Both Steve and our daughter asked me several times during the day if I was okay because I was quiet. I told them I was fine, but kept to myself for most of the day.

Later in the evening, I decided to go to the store to pick up a couple things. Steve offered to go for me since it was already dark and he knows my night vision isn't the greatest, but I assured him I'd be fine. As soon as I got in the car, I burst into tears for no reason. I took off anyway, figuring it would blow over in a minute, but ended up turning around and coming back because I was crying so hard I was scared I'd wreck.

As soon as I got back, I went straight for the bathroom to be alone, but Steve and our daughter both followed. I could hear them through the door asking if I was okay and what was wrong, but I was crying too hard to answer. Finally Steve came in and got me calmed down enough that I could say that I didn't even know why I was crying and that it must be hormones.

He led me out to the bedroom and tucked me into bed. Since our daughter was a little freaked out by the whole thing, he explained to her that I was fine and it was completely normal for pregnancy hormones to make mom a little moody. Then he went to the store for me.

The next day I was back to my normal self so I figured it was just a fluke. I was wrong. Yesterday morning I woke up cranky. Within an hour of getting up, I'd snapped at both Steve and our daughter. Then I felt bad about it and cried.

I mentioned it to the midwife at our appointment (mainly because I wanted her to reassure my daughter that it's normal). She was great about it and even shared a couple stories from her own pregnancies. The rest of the appointment went well. Baby's heart sounds good. I'm measuring right on schedule. Since one of my shoulders has been bothering me, I asked about it. The midwife looked at it, said I was carrying a lot of tension in it and my neck, and then showed Steve a few massage techniques that he can do to help me. Even though she just did a short demo to show Steve, it did wonders. As soon as she left, I went to the store to pick up some massage oil.
Posted by Dana at 12:01 PM 3 comments: 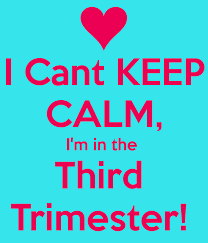 The pregnancy is moving right along. I'm now in in the third trimester. It's hard to believe I'm that far along already, although it's definitely evident by looking at me. I have gained very little weight this time around, but I look bigger than I did when I was 9 months pregnant with my daughter. We had a get-together a few days ago and Steve's friend actually asked if I was sure I wasn't having twins (he has twins himself). It was kind of funny because me, Steve and our daughter have all three had dreams that I'm having twins.

We still don't know the gender. I told Steve that I'm beginning to think it's just not meant for us to find out. I called around to the two nearby elective ultrasound places I had found online. One is no longer in business. We hit a snag with the second place. We were all set to schedule their basic gender determination package when the lady told me that it was only available until you're 20 weeks. After that, you have to upgrade to the next package, which includes 3D/4D and costs double. After going round with the lady for close to 20 minutes, she finally said she could do a 2D gender determination, but we'd still have to pay the higher fee. I told her to forget it. I looked online and the only other place that's anywhere close is two hours away.

In the meantime, we're busy preparing for the baby's arrival. We went down to the basement the other week and dug through the bins of baby stuff I had saved from our daughter.  It took a lot longer than we planned because we kept getting caught up in memories and showing our daughter how little she used to be, but I did manage to find some things that will work for a girl or a boy.

Since everyone kept asking what I wanted, I finally set up a baby registry. It was a new experience for us since we didn't do one with our daughter. It ended up taking forever because I'm the type of person that has to research everything before making up my mind. Seriously, it took me two weeks to figure out what car seat I wanted.

I still feel pretty good, although between hormones and warm weather setting in, I'm wilting in the heat. With my daughter, it wasn't as bad because I was pregnant through the winter and had her before the heat of summer set in. This time around I'm going through the heat of the summer. Thankfully Steve rounded up some fans and window A/C units. He has also taken over cooking a couple nights a week so I don't have to deal with the stove as much. When I do cook, I try to double up so we have enough leftovers for another meal.

The baby has been very active lately. He/she turned a flip the other day. While it wasn't the most comfortable sensation, it did have the effect of making my low back pain stop. Apparently, the position the baby was in was causing it.

The kicks are getting a lot stronger now that he/she changed position. I was sitting up in bed yesterday evening reading my Kindle and the baby nearly kicked it off my stomach where I had it resting. Our daughter came in a few minutes later and got to feel a few kicks. Then when I told Steve to feel, the baby quit. He waited a few minutes to see if the kicks would start back up and just as he was giving up and starting to move his hand away, the baby kicked him hard.

In other news, we passed 4 years of DD last week. With everything going on, it slipped by without us even noticing. It's pretty much on the back burner for now aside from the occasional warning or random swat. Even so, I still appreciate the things that linger-the closeness, his attentiveness and even my emotional balance despite the hormones.
Posted by Dana at 4:55 PM 9 comments: