We're down to the final month of this pregnancy. As of yesterday, I'm 36 weeks. I'm still amazed at how fast this pregnancy has went. It seems like just yesterday that I got the shock of my life when that second line appeared.

Things continue to go well, although I've noticed a definite increase in crankiness. So far Steve and our daughter have stayed on my good side, but everyone else is ticking me off. Like the friend who volunteered to throw my baby shower, which was supposed to happen a couple weeks ago, but then bailed on it without a word. Or my sister, who has called several times saying she's coming over to visit, leading me to rearrange my schedule to make sure I'm home when she comes, and then never shows up. I understand that stuff happens and plans change, but is it really that hard to call or send a text to let someone know instead of leaving them hanging?

Even our animals are annoying me. One of the dogs keeps getting in my way whenever I try to get out of bed. The other waits until I lay down and get comfy to bark that he wants up (he's older and has trouble jumping up himself). The cats are constantly under my feet. I trip over them daily and have been lucky so far that I haven't actually fell. When they're not underfoot, they're on the counter knocking stuff down or attacking my houseplants. 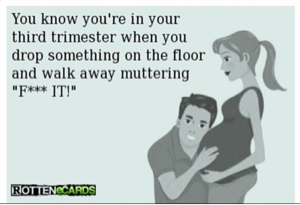 Some of the crankiness can probably be attributed to reaching the awkward, uncomfortable stage of pregnancy. The baby dropped a couple weeks ago and has been putting a lot of pressure on my lower back and pelvic bones. Even my butt hurts. Bending over is such a chore that I don't even bother. If I drop something, it's staying there until someone else gets it. Thankfully I remembered early on that putting on real shoes is a pain while pregnant so I made it a point to buy a couple pair of sandals that I could slip on without bending over.

I'm having a lot of Braxton hicks contractions, which are always fun because you find yourself wondering is this the real thing or is my body just messing with me. The other day I really found myself wondering after I had several back to back contractions that had a bit of an edge to them. Thankfully, they stopped after I ate and laid down for a while. I had a second round of them that evening, but they weren't as bad and stopped when I decided to take a bath. On a good note, I've heard that the more practice labor you have, the faster real labor goes. 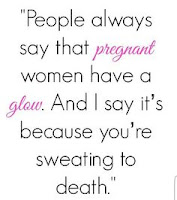 I've been having hormone-induced hot flashes for the last month. Actually it's not so much of a hot flash as constantly feeling like I'm overheating. At first, I tried to cope by wearing minimal clothing and staying indoors with the A/C as much as possible, but it just wasn't doing the trick. It seemed that I was destined to be hot and sweaty no matter what I did. Poor Steve nearly froze to death before I figured out it's not so much the temperature of the room as it is needing to have air blowing on me constantly. I now have a cheap table-top fan that I carry from room to room with me. I even have a handheld battery-powered fan for when I go outside.

Nesting has kicked backed in. I started nesting early, but it tapered off. Now it's back in full force. The freezer is rapidly filling with postpartum meals. My birthing space is almost ready and just waiting on the midwife to deliver the pool. I had Steve mix up a batch of my homemade laundry detergent and have been washing everything in sight. My diapering station is set up and stocked. The diaper bag is packed. Despite the fact I know I'll probably have trouble getting back up, I find myself wanting to scrub the floors on my hands and knees.

I nested so hard yesterday that I wore myself out before I could even eat the supper that I had been craving for weeks and had spent all day working on (slow roasted baby back ribs with homemade dry rub and barbecue sauce with a side of homemade coleslaw). I handed Steve his plate and told him I was going to bed. He came in after eating to check on me and, even though he kept talking about how melt in your mouth delicious the ribs were, I just couldn't work up the energy to get up and eat. I ended up sleeping for 9 hours.

Today, the nesting instinct was still going strong, but I lacked the energy to do much. After going grocery shopping and doing a little laundry, I was wore out. Even though I was tired, I couldn't fall asleep so I curled up with a book for a while until I was finally able to doze off. I ended up taking a 4 hour nap and probably would have slept longer, but Steve came in from work so I got up to visit with him and cook supper.
Posted by Dana at 10:09 PM 5 comments: